Young people in Canada participate extensively in law reform—even though they may not realize it! Through their activism, they can, and do, influence lawmakers in many ways. I started my law reform work in climate change at 16 years old. At the time, I was not even aware that I was participating in law reform, but the actions that I and other youth in my community took had a profound impact on the world around us.

As a climate activist and law reformer, I organized multiple events and campaigns in my community. This involved working with students and faculty from multiple schools and having discussions with different organizations and politicians. So how does a 16-year-old practice law reform? 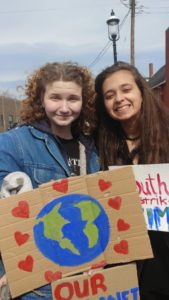 My main method of activism, and the segue into my beginnings in law reform, was organizing climate rallies. I was initially inspired to take action by the Fridays for Future movement, which was an open invitation to youth around the world to engage in climate activism. It launched in 2018 and ignited a spark in students around the world. Thousands of students left school on Fridays to go to their elected officials’ offices demanding that they take action to protect the environment and save our future. The impact of this movement was felt across Canada, including in Nova Scotia where I was living at the time. I felt a strong desire to take action and began planning my first rally.

I began with outreach. Who else was interested in planning the rally and what resources were at my disposal? For many youth activists, their school is an essential resource for organization and outreach. Having a supportive school administration that is looking to help young people grow and develop their passions and skills is critical to youths’ engagement in their communities. I worked with my school administration and other students to develop a contact list.

After assembling a group of community members from diverse backgrounds, we were able to start planning. What was the goal of the rally? To whom was its message directed? What activities did we want to have or what statements did we want to make during the rally? These were essential questions to ask, and the answers were different for each rally. The goals of our rallies were often to express our concern to the federal government regarding their lack of action in the climate crisis, notably demanding more funding for environmental organizations, green energy production, and transitional training for individuals in the oil, gas, mining, and forestry industries. We held activities that we felt would make a statement. There are many critical issues to address when it comes to climate activism; it was important that we had a clear stance and message to share with the public to promote the event and garner support.

Community outreach and networking are two essential steps in activism and law reform. Through my outreach efforts, I was able to determine who the relevant political actors were in my community and how to best approach them. So, I sent an email on behalf of our group to my Member of Parliament at the time, Lenore Zann, and asked to interview her about her stance on climate action.

On our way to one of the rallies, myself and other young protesters stopped by her office to speak with her. We engaged in a very productive, respectful, and informative conversation. Ms. Zann wanted to know what we thought was important when it comes to an environmentally conscious federal government and was open to hearing what we had to say. She explained the importance of reaching out to elected officials: the more people in an MP’s constituency speak out on a certain issue, the more support the elected official has in standing up in the legislative assembly to speak on the issue on behalf of their constituents. Afterwards, we presented her with a letter on behalf of my school’s environment club demanding that the federal government take action to protect our environment. Just a few weeks later, Ms. Zann introduced a federal version of a bill she had previously passed in the Nova Scotia legislature. This was a Private Member’s Bill (originally introduced as Bill C-230) called “An Act respecting the development of a national strategy to assess, prevent and address environmental racism and to advance environmental justice.” Unfortunately, the government called an election before the Bill could become law. Thankfully, after the 2021 federal election, MP Elizabeth May reintroduced the Bill as Bill C-226, which as of 2022 is moving through the federal legislature. If the Bill becomes law, it will require the Minister of the Environment to consult various interested bodies to develop a national action strategy to address environmental racism. Bill C-226 would help provide support to communities and groups disproportionately affected by the climate crisis, such as people of color and Indigenous peoples.

Decision-makers must treat young people as valued voices and contributors in discussions about law reform and policy. There is a common misconception that politicians will not listen to youth because we are too inexperienced or too young to vote. But youth actually have a great deal of political power they can wield through their ability to connect with one another and to acquire and spread knowledge like no generation before. Using these skills, we can collectively communicate with decision-makers to compel them to act. We need more youth at the table alongside those decision-makers who are discussing environmental law reform because, ultimately, these are discussions about our future. The stakes are highest for young people; we are sure to bring an essential perspective to the table every time.

NAWL takes a stand against victim blaming
Intimate partner and domestic violence in Canada: a Brief to the Status of Women Committee
Letter to the Federation of Law Societies of Canada
More updates
About Us
Our Work
Resources
NAWL Trust
Contact Us
1404 Scott Street
Ottawa, ON
K1Y 2N2
+1 613 241-7570
info@nawl.ca

NAWL is located on the traditional, unceded territories of the Algonquin Anishnaabeg People.
© 2023 National Association of Women and the Law
Sitemap Privacy Policy