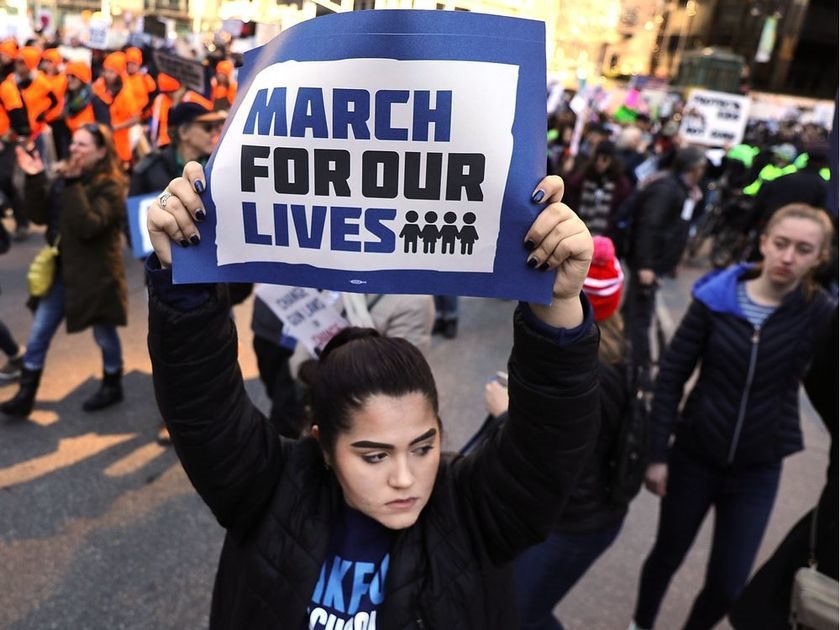 Thousands of people, many of them students, march against gun violence in Manhattan during the March for Our Lives rally on March 24, 2018 in New York City. More than 800 March for Our Lives events, organized by survivors of the Parkland, Florida school shooting on February 14 that left 17 dead, are taking place around the world to call for legislative action to address school safety and gun violence.SPENCER PLATT / GETTY IMAGES

Published by The Ottawa Citizen on April 5, 2018. Link here.

The author, Gladys A. Osien is a common law student at the University of Ottawa. She is enrolled in the Feminist Law Reform course lead by Professor Martha Jackman, NAWL co-chair, and Suki Beavers, NAWL’s Project Director.

When a man gets shot in a neighbourhood, we talk about guns and gangs. When a partner shoots and kills his wife and children, we talk about domestic violence. When a person shoots multiple people in a private or public setting, we talk about mental health. When children are victims of shootings in a school, we talk about how different our gun laws are from the United States.

The truth is that these issues are all related to gun violence in Canada, and it’s time we stopped limiting the conversation of gun crimes in Canada to gangs and at-risk youth.

Recently, hundreds gathered in front of Parliament Hill to show solidarity with marches in the United States calling for the end of gun violence. That same weekend in Ottawa, a shooting sent a 35-year-old man to the hospital. Commenting on the situation, Ottawa Mayor Jim Watson suggested it was partly the responsibility of communities to ensure youth don’t join gangs, and proposed career counselling and apprenticeship as methods of engaging them.

Many believe that gun violence is just an urban problem, and that the issues are centred on crime, gangs and youth who are not preoccupied enough. This is a popular view; when Public Safety Minister Goodale held a summit on gun control, it was centred on gang crime. Addressing the issues of children and adults in gangs is important, but limiting the conversation of gun violence to gangs is negligent.

Gun violence is not just about gangs. Gun violence is being hit by a stray bullet; being shot by a stranger; dying with your children at the hands of a spouse or partner in a domestic dispute; being shot accidentally while handling a firearm; and dying from suicide, to name a few horrific examples that too many of us are familiar with.

The issue of gun control is complicated, the perpetrators and victims are different and vary in every scenario. If we limit our conversation of gun control to gangs, we are missing opportunities to create legislation that keeps everyone safe.

As experts have said, gun violence can spill into the public health arena. Guns are too often the weapon of choice for individuals who end their lives. The current law states that guns should be kept away from people who have been treated for a mental illness associated with violence. What do we do in situations where an individual’s mental illness is untreated? Or situations where there is an issue of capacity, such as in the case of a degenerative cognitive illness such as dementia or Alzheimer’s. The new federal bill does not allow for ongoing assessments of an individual’s mental state. Bill C-71 does not even mention “mental illness,” leaving a large gap in the way we can continuously properly identify individuals who should not be eligible to possess a firearm.

A firearm in the home dramatically increases the risk of death. Guns are the second-most common method used in spousal homicides. Shooting accounts for 22 per cent of these deaths. The presence of a firearm in the home can lead not only to physical harm, but can have psychological effects as well. It can be intimidating. For example, one minute you’re arguing with your partner and the next, he’s cleaning his gun.

Although there are regulations in place for the handling and storing of guns, accidental injuries and deaths caused by firearms continue to be an issue in Canada. A recent study has shown that every day someone under the age of 25 is shot in Ontario, and 75 per cent of these incidents are accidental.

Prevention of gun violence is going to cost money. The government plans to spend $327.6 million over five years, and $100 million annually thereafter. This money would be pointless without the appropriate legislative changes.

It seems irresponsible to pour hundreds of millions into a problem without addressing all, if not most, of the issues that come into play. More than anything, the key to making important legislative changes is being open-minded, recognizing and hearing the victims, and understanding that gun violence is not just about gangs.

No Legislation: What we really need to do in Canada to improve abortion access
BILL C-28: Letter to Senators
PRESS RELEASE: Bill C-28 Falls Short in Protecting Women
More updates
About Us
Our Work
Resources
NAWL Trust
Contact Us
1404 Scott Street
Ottawa, ON
K1Y 2N2
+1 613 241-7570
info@nawl.ca