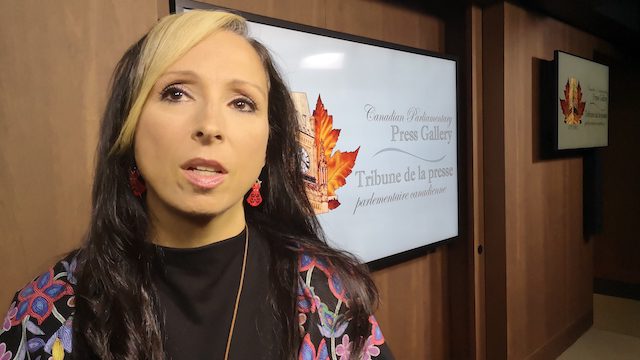 A coalition of women’s rights organizations is demanding action in Ottawa following the release of a United Nations report that highlights what it says is Canada’s failure to address violence against women.

In particular, UN Special Rapporteur for Violence Against Women Dubravka Šimonović draws attention to her finding that “Indigenous women from First Nations, Metis and Inuit communities face violence, marginalization, exclusion and poverty because of institutional, systemic, multiple intersecting forms of discrimination not addressed adequately by the State.”

The report comes just weeks after the National Inquiry into Missing and Murdered Indigenous Women and Girls (MMIWG) detailed its findings of ongoing genocide against Indigenous women, girls and 2SLGBTQQIA folks.

Šimonović’s report will be delivered to the UN Human Rights Council, which monitors human rights abuses globally and makes recommendations to countries found to be in violation of human rights.

Mi’kmaq lawyer Pam Palmater, who worked with the Feminist Alliance for International Action (FAFIA) as a joint party with standing in the MMIWG national inquiry, called the UN report “very timely,” speaking at a press conference on Parliament Hill in Ottawa Thursday.

“We know the National Inquiry found there was genocide committed against Indigenous women and girls, and the reasons for that was Canada’s laws, policies and practices were both racist and sexist, which create this framework of violence,” she said.

In her report, Šimonović says she “observed significant gaps and challenges related to prevention and protection of women from gender-based violence, in particular with regard to Indigenous women and girls.”

Šimonović also notes that “an issue of major of concern in the country is the inadequate protection of Indigenous women and girls’ economic social and cultural rights as an element exacerbating the high rate of violence against women.

“Indigenous women from First Nations, Metis and Inuit communities face violence, marginalization, exclusion and poverty because of institutional, systemic, multiple intersecting forms of discrimination not addressed adequately by the State.”

The special rapporteur specifically names high rates of child apprehension, the over-incarceration of Indigenous women, coerced sterilization and sexualized violence by police and corrections officers as issues related to what she refers to at one point in her report as “gendered colonization”.

She also notes the conclusions of a survey conducted by the Canadian Women’s Foundation, which found that Indigenous women and girls make up half of human trafficking victims.

In a written statement, Monsef’s Press Secretary Braeson Holland outlined a number of investments the Liberals have made to address and prevent gender-based violence and said government is reviewing Šimonović’s report and recommendations.

“Gender-based violence must not be tolerated in Canada, and we will continue to work with our partners across all sectors – including other orders of government, the not-for-profit sector, philanthropy, and the private sector – to end gender-based violence in all of its forms,” Holland writes.

The special rapporteur’s report will be delivered to the UN Human Rights Council.

She called on Canada to implement the MMIWG National Inquiry’s 231 Calls for Justice but stopped short of naming the violence against Indigenous women, girls and 2SLGBTQQIA peoples genocide.

Bachelet, a former two-term president of Chile and prisoner of conscience under that country’s Pinochet dictatorship, did not answer a question from APTN on whether Canada, given its treatment of Indigenous peoples, should have a seat on the UN Security Council.

Canada is presently vying for a seat on the prestigious council, which comes with significant diplomatic powers.

Palmater said Thursday in Ottawa the new UN report adds “extra force to calling on Canada to act now,” and that it’s “incumbent on the United Nations in all of its forums, to really rethink, what should Canada’s role be — whether it’s at the security council, or any of the treaty bodies — and how can they best hold them to account for continued violence against Indigenous women and girls, created by Canada’s laws and policies, that aren’t being addressed?”

Šimonović, Bachelet and the MMIWG national inquiry have all called on Canada to implement a national action plan to address the systemic gender- and race-based violence against Indigenous women.

Trudeau announced on June 3 the government will “conduct a thorough review” of the MMIWG report, “and we will develop and implement a National Action Plan to address violence against Indigenous women, girls, and LGBTQ and two-spirit people.”

He also said the feds “will turn the inquiry’s Calls for Justice into real, meaningful, Indigenous-led action.”

Trudeau made a similar promise when the Truth and Reconciliation Commission released its final report in 2015.

In his election campaign Trudeau promised to implement the TRC’s 94 calls to action, including implementing the UN Declaration on the Rights of Indigenous Peoples (UNDRIP) as the framework for reconciliation.

A private member’s bill from Cree NDP-MP Romeo Saganash compelling Canada to align its laws with UNDRIP, which represents the global minimum human rights standards for Indigenous peoples, made it all the way to third reading in the Senate earlier this month.

Now it’s poised to die on the order paper following weeks of resistance from Conservative senators.

Advocates of the bill say the Trudeau government could have adopted it as a government bill to ensure its passage into law.

Trudeau is now promising to implement UNDRIP if Canadians re-elect the Liberals in this fall’s federal election.

Among her recommendations, Šimonović calls on the federal government to “fully harmonize laws at all levels of the national jurisdiction with the [Convention on the Elimination of all Forms of Discrimination Against Women] and, with regards to Indigenous women, in conjunction with the United Nations Declaration on the Rights of Indigenous Peoples.”

She also calls on Canada to investigate “all allegations of forced or coerced sterilizations, with particular attention to cases involving Indigenous women and girls.”